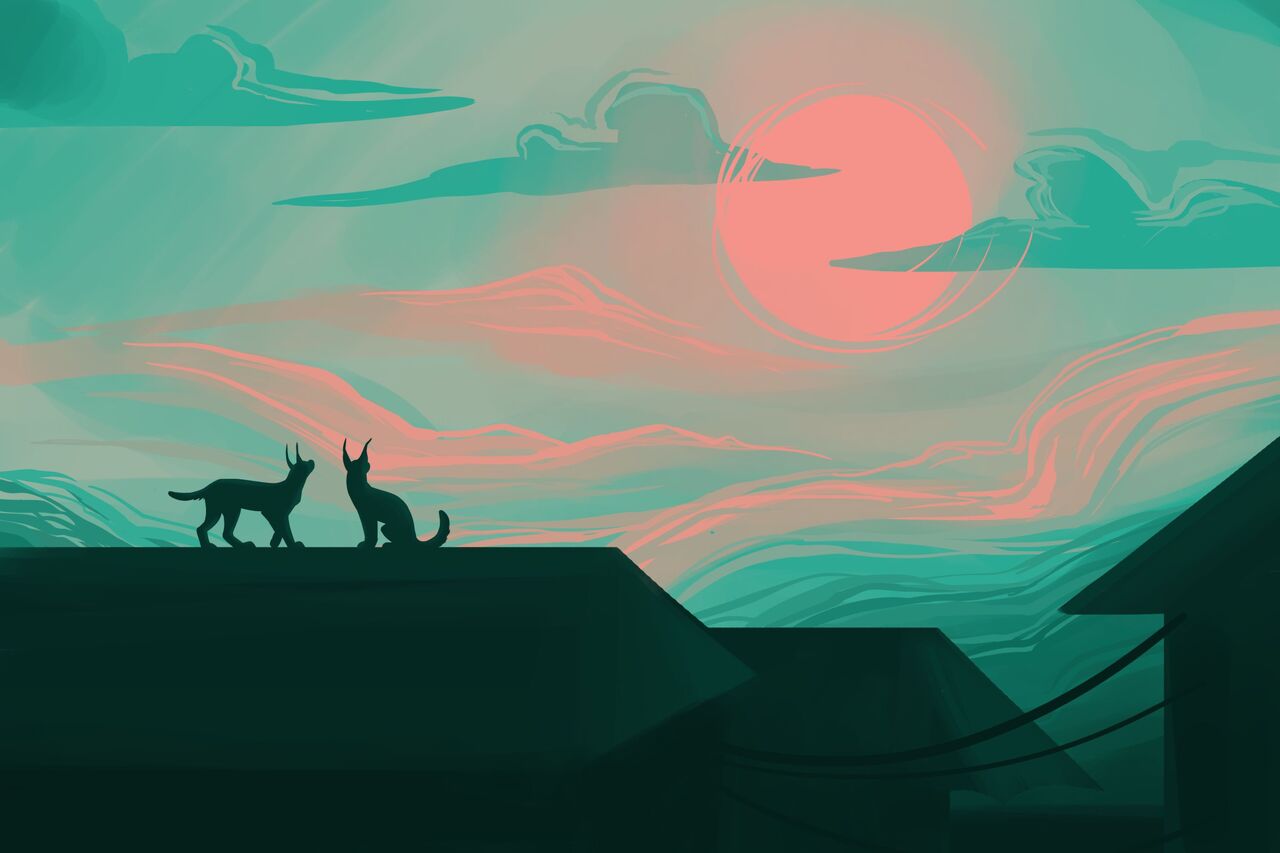 What's on your mind?

heelllooo! it's been like 15 years, but that's ok. I was only editing on one wiki for a bit for some reasons, but i ''should'' be back now. hey no promises, i say that every time and then i go 'poof'

So this will be about Talonfang's group! you all probably know this but i'm gonna talk your ear off anyway:

Talonfang freaks when Sandynose is made leader. She thought she would be deputy, but no. Sandynose chose darling little Creekfrost instead. Talonfang is really pissed.

Soo, let's back up a bit. When Larchstar (aka robot in disguise) is still leader, Talonfang makes a plan for if she ''isn't'' made deputy. hey, anythings possible (life finds a way)

She decides to recruit a group of loyal cats together. She went to each Clan and picked off the weaker cats, the ones with wayward minds and impossible hopes and dreams, and offers everything they seek (reference to one of THE BEST SONFGS EVER)

In Talonfang's club, you don't have to wait your turn to eat that food. In her group, you can take other cats prey, in her group, you can be mates with whoever you want, even if they aren't in your clan, in her group, they can be made into strong fighters. Depending on whose needs she's promising to fulfill, she may even lie that she can heal the ones who are destined to die. hell, maybe she can even turn water to wine. Well, it's basically a god Clan where you can do whatever you want, and if you want something, Talonfang will give you it.

Since they're too stupid to realize she ''can't'', they follow her blindly and promise to be loyal warriors and help her with her tasks. She also lies to them that everyone in SuC are a-holes and if she isn't made leader, the clan is going to be savage.

She's also got some loners and rogues in there, maybe even kittypets ^

So, back to the beginning. Creekfrost is made deputy and Talonfang got PISSED. ay, at least she had her plan to help her out!

She gathers her followers and attacks, then is exiled. Talonfang is even more pissed then before. She leads her new clan into some tunnels and names them HiddenClan. She's mad at them for losing the fight because they are too weak and forces them to constantly battle train. And they can't escape. The reason she chose the tunnels was so she could block off most of the entrances and keep the main one constantly guarded, then no one could leave. And if they spoke out, they'd be put up to a fight to the death with another one of the cats, usually one much stronger than them.

So that's pretty much all I wanted to explain. Palmpaw joins this group and will lead a rebellion against them, but i'll wait to post that one until closer.

HiddenClan needs members. They are a very large group, so there'd be a lot of members.

I'm going to make a temporary list of the group below; if you want your cats to be in it, comment below.

Hunter is part of a group of rogues. At the moment they do not have a name, but they are a pretty organized group of cats who move from territory from territory as the seasons change. They are very hostile and are not willing to share prey with anyone else.

Right now they have settled just outside of AshClan's territory and they despise the Clans and their ways, so they are planning to invade AshClan and take over. They are a large and powerful group, so it will be a close one, but AshClan will overcome the group.

It starts with Ravenstar and the groups leader. Leader befriends Ravenstar and she trusts them very fast. A few of the cats move into AshClan to learn their weaknesses, in the mean time, reporting back to the group. Then the group attacks.

The Clan will blame Ravenstar for being too quick to trust and the Clan will then divide, trying to pick which cats they think will be the best leaders. Ravenstar has some followers, Needleclaw has some, and then maybe some other cats have smaller followings, then the rest just go off and make their own little group.

This was planned a little while ago, but i was thinking we could have this happen soon. So the group needs a name, a leader, two deputy sort of things, then three healers, and the rest will be like warriors.

If you have any other ideas to add to this, please let me know below! And if I forgot about something/or said something that wasn't supposed to happen, let me know about that too.

Hi! So I wanted to show you a few stuff that was newly added to the wiki. So first of all, there's an Adoption page! To get there, go to DIRECTION at the top, then THINGS TO DO, and finally, Character Adoption! There, you can put up cats you don't want to rp anymore for someone else to rp! Just follow all that stuff listed on there.

Then there's the "Discussion Activity". This was added a while ago, but why not include it? It appears near the bottom right corner of any normal article(pretty much a page that isn't a discussion post). This lists the four most recent discussion posts, so you're sure to not miss one!

Also, we changed comments into talk pages! Now, instead of commenting on a page, you will leave a message with your sig on the page's talk page. You can get to the talk page by hitting the arrow next to the EDIT button, and choosing Talk.

And finally, there's the New User Guide. A lot of you users know about this already, but I just want to point it out here anyway. This can be found by going under DIRECTION, then WIKI HELP, and then New User Guide. This is a wiki guide for any new users interested in the history of the rp Clans and more!

So that's about it! I'll add more things if more changes come.

Hello, I'm new here and I'm happy to be here so this is a little post/forum about my cats that need mates, are having babies, or I just want to do a plot with them so let's get started.

First, I'm putting up my AshClan ladies. Sorrelflower needs some dudes for her current litter and future ones, it'd be a bonus if one of the future ones was her forever dude, but she does need a baby daddy. As well as anyone that wants a little Sorrel baby can request one here, I'll be owning two of them, myself.

Rainsweptflower. She's my pride and joy. She needs quite a bit of rule breaking plots. Eventually I believe she'd find a mate but I'm fairly positive he wouldn't be of AshClan so if your interested just offer your dudes up. Before she picks this mate from another Clan she'll try to remain loyal to her Clan meaning she'd take a mate from AshClan but eventually she'd leave this Ash dude for her outer Clan dude.

Second, I'll be doing my SunClan dudes. Runningbrook will go first. I don't think she'll take a mate, but she might be interested in a guy when she leaves her beautiful world. I haven't decided if she'll have kits, I'd like hee to but I'm unsure currently. If she does have kits, the father won't know until they're either apprentices/warriors.

Sturgeonwhisker, he's a nice dude and maybe needs a potential rival that brings out the brave in him and makes him more sociable and talkative.

I'm not quite sure what I'll do with Batpaw, but it'd be cool to generate some things for him so if you have ideas just let me know!

Thirdly, I'll move on to my SoulClan cats. Pink-Eyes, he's my little baby and needs a lady to settle down with that won't judge him for his weird appearance or nature. Of course, I feel like this lady and him would have troubles due to his and Rosepaw's close relationship so the drama's a bonus.

Rosepaw, I'm not sure what I'll do with her but I do want her to have another best friend after Pink-Eyes. I think eventually these two will drift apart when Pink-Eyes has his lady. So her new best friend will have to be in SoulClan and ready to go on adventures with her and be able to handle her bossy attitude, I believe she'd fall in love with her new best friend so long as the other user is chill with it.

Fourthly, I'll do FrostClan. I haven't got much for these guys but there's a few.

Thistlekit, she's gonna be a Dark Forest trainee so she'll need a mentor from there. I think she'd fall in love with this deceases DF mentor (if its a dude). She's totally a cat for power so I think she'd attempt to asassinate so high-ranked folks and be exiled, maybe Thunderstrike csn save this high-rannes cat(???). It'd be cool if she startes a loner group like BloodClan.

Berryflower, there isn't much planned for her. Maybe a forever mate and a second litter then retirement. Offer your dudes up.

Also, Molly (my female loner) is expecting and her and Wolf will be moving to a Clan, not sure which one yet, so if you want obe. The babes would have Clan names.

~Mink over and out~

When I'm looking for a or crush for a character, I'll post here with a reply to bump it up!

When I'm looking for a or crush for a character, I'll post here with a reply to bump it up!

--Thunderpaw: Seeking a possible mate after CreekBloom plot. NOTICE: He's not the greatest cat...like, probably the worst guy around.

--Galepaw: Miss Galepaw will be looking for a crush and eventual mate. Toms are more than welcome to have crushes on her as well, just to irritate her brother! ;D

So on the infobox character template, I added "Death by" under a "Life" header. If you don't put anything for that, the default will be "still alive" so if your cat is still alive, you don't have to worry about that.

So our Clans need some interesting roleplay plots that everyone can be involved with! I have one of my own, which I use on almost every wiki (because i love it)

If any of you have read Two Birds on WFW, then you'll know about a bit of it. So Talonfang wants to become deputy and will kill for it and desperately tries to prove herself to the Clan, only for Creekfrost to be given the rank. She flips out, tries killing someone. She has also been gathering rogues together who support her, so they attack a patrol who went after her, but she leaves and promises Creek she won't come back.

But she doesn't keep it, keeps stalking the Clan, killing some cats along the way, then finally with her new evil rogue group, they attack the Clan, but Talonfang is killed in battle and its ok.

So thoughts? Have your own ideas?

Chat event times will be posted here, so please reply with times you can be on! Thanks!