Shadowstorm is a large, stocky tom with long, muscular legs. His pelt is a smoky charcoal gray, darker along his back, with black mackerel tabby stripes extending down to his sides and to his belly. Shadowstorm's pelt is short and thick, often well cleaned.  But during some days, when battle training, he tends to leave it covered in dirt, to give him a rough appearance. His broad chest is white, and extends up to his muzzle and down through his belly to the beginning of his tail. Shadowstorm's four paws are also a bright white.

Shadowstorm's head is finely shaped, and so are his ears.  His jaw is large and strong, and his nose and paw-pads are a jet-black. Shadowstorm's paws are surprisingly soft, and somewhat fuzzy, giving him a kit-like appearance, often irritating him. His whiskers are long and droopy, and have a dark gray, almost black, color.  His ears have a pointed tip, and sit high up on his head.  The claws in his fuzzy white paws are surprisingly short, but not dull.  His teeth are average size, and a bright white, kept clean by occasionally chewing on bones to sharpen and whiten them.

Shadowstorm's eyes are a bright, brilliant blue at a distance.  Up close, Shadowstorm's eyes are blue, but have a dull ring of green around his iris.  His bone structure is thick, but that doesn't make him chubby.  His tail is long and winding, giving him excellent balance, but makes it a bit of a trouble when hunting.  His larger size makes Shadowstorm struggle through small places. From a distance, he has a bit more of a slender appearance, thanks to his long legs that provide him with wide strides.

Shadowstorm is a healthy, fit tom.  He has a high metabolize, which keeps him energetic and thin.  Shadowstorm has no struggles when it comes to running, he doesn't gasp for breath like unfit cats.  He has a high amount of stamina, and he travels about with ease.

His mind is healthy, and he's a stable cat.  He is quite a quick thinker, especially when he's pressured or angered.  But, Shadowstorm can be easily angered, which may be due to stress.  Where this stress comes from, it is unknown, but it may be due to Clan life living in the wild.  Though he does get easily stressed, Shadowstorm will never quit clan-life.

Youth certainly isn't something Shadowstorm lacks, particularly in his heart. He's a very energetic tom, and seems to be easily excited by the simplest of topics. This seems to be a very positive trait of his, as it easily motivates him to work even harder. However, there is a bit of a downfall to his energetic personality: he's easily distracted. Shadowstorm enjoys working hard, for it makes him feel good, but he tends to float from task to task...one moment he's hunting, and the next moment, he's sniffing all the flowers he fell into.

Shadowstorm has a very positive outlook on life, and is generally a very happy and active cat. He's an optimistic character who always attempts to point out the good in life. This doesn't mean, however, that he doesn't have his own troubling thoughts within his head. Although he's energetic and is optimistic, he tends to get easily frustrated. This doesn't mean he'll give up, more or less, he'll get distracted with something else. His overly-positiveness can also become quite annoying, particularly in dire situations.

Loyalty, unfortunately, seems to be something Shadowstorm lacks. With his scattered personality, he easily gets bored of different things, although he may want to work on it even further. He'll take a break from something, forget about it, and then feel bad for forgetting about it. He tends to be loyal in relationships, as if he had a mate, but not so much towards his Clan. He doesn't really believe in following the code: they're all cats, why have pointless groups to separate them?

A notably curious cat, Shadowstorm is an idealist. He loves to think up all sorts of plots and plans, and tends to dream a bit too big for what he can do. He can think of the wildest of things, however, he fears sharing these. What if they think poorly of him? As a result, Shadowstorm tends to be a bit too self-conscious for his own good, although he tries to not show it. He simply keeps smiling and trotting on, remaining his positive self.

"I hate to admit it, but...I never really returned her feelings. She was cool, and I kind of 'liked' her as a crush, I suppose. I only ever realized this until she admitted this to me, and then...died. I feel horrible, but I guess I'm just not really good with the whole 'feelings' thing. I particularly feel horrible for Ace...he was so into her." 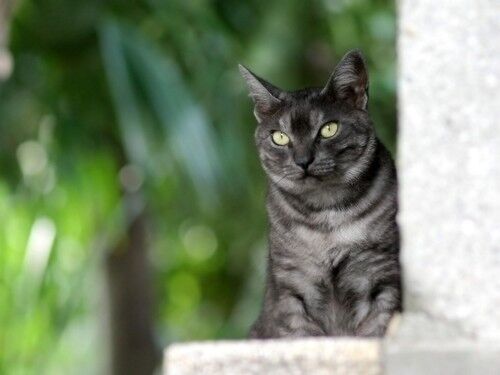 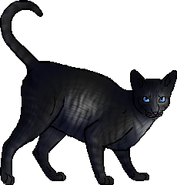